The players are shipwrecked on the shores of Isla Exilia - the dreaded trash island where the most ruthless of criminals are sent to live out their life sentences.

Prisoners capture the players and attempt to use them in a sacrificial ritual designed to stop the Leviathan from destroying the island.

The players must survive, evade a pack of trained sharks, race against the prisoners (led by the cruel half-man half-shark - Captain Bluto) to the top of a derelict Galleon (vertically stuck on its end, like sinking Titanic), and harness the Roc (an enormous bird) perched at the top - their only chance to escape and fly away to freedom.

Out in the Sargasso sea, lies Isla Exilia - a twisted mess of shipwrecks, debris, and rotting carcasses of sea creatures. Any lost ship that gets caught by the currents will eventually end up in this doomed place.

Those on land know that the fate of rudderless ships is to end up crashing on Isla Exilia, and purposely maroon their worst criminals by setting them adrift on a sabotaged, old derelict ship ready to be sunk.

The prisoners lucky enough to be thrown on the shores of Isla Exhilia before their ship falls apart have made a society for themselves, dwelling inside the wrecked ships and surviving off the bounty of the ocean.

In the middle of the island is Poseidon’s Wrath - an enormous Galleon set on its rear. It looms over the island like the leaning tower of Pisa (think the Titanic just before it sinks).

Once per year, a migrating Roc takes a brief rest on top of this ship. There are tales of foolhardy prisoners who managed to make the climb to the top, harness the Roc, and fly away to freedom.

Each time the Roc arrives (the day known as The Coming of The Roc), the Leviathan rises from the depths of the sea and rears its head, preparing to strike. The legends say that the Leviathan has been hunting the Roc for thousands of years, and human sacrifice is the only way to appease its hunger, prevent it from attacking the Roc, and destroying the island.

The players begin their adventure sailing a small ship hopelessly caught by the strong currents, accelerating towards the shores of Isla Exilia until it hits some large underwater object and falls apart.

They must survive the shipwreck, avoid hungry sharks circling them,  and swim towards the shore - a stinking mound of debris, kelp, hulls of broken ships, and rotting carcasses of sea creatures.

The most perceptive players will notice faint shadows of enormous tentacles looming in the murky waters - the cause of their crash.

Once the players arrive, they are surrounded by the prisoners, who seem to be in surprisingly good spirits. Prisoners are led by Captain Bluto, who commands to apprehend the new arrivals and take them to The Ring to “participate in the Festival”.

Captain Bluto, the leader of the prisoners, half-person half-shark (think King Shark from The Suicide Squad). Ruthless, ambitious, determined to escape the island at any cost.

The players are captured, restrained, and escorted to the circle of ships in the distance.

While the party is being escorted, a peculiar prisoner approaches them and goes on about random bird facts.

Crazy, old bird enthusiast. He loves the Isla Exilia for all of the sea birds it attracts, and is obsessed with researching the Roc. He is missing a leg that he lost to one of the sharks.

He seems easy to dismiss as crazy, but he’s happy to share what he knows about the island and its history.

He tells them that if they survive the Festival (the sacrificial ritual to placate the Leviathan), they might have a chance of escaping this place. He offers his help in exchange for helping him to get to the Roc he wishes to fly on.

The Ring of Blood

Players are escorted inside the circle of ships, which surround a large space of open water, where people are fishing, washing clothes, drying fish - The Ring is the center of this society and provides everything the prisoners need to continue their survival.

They watch as Captain Bluto summons a Pack of Wily Sharks, who take fish from his hand and  answer to him like a pack of vicious dogs.

This pack of sharks is intelligent like wolves and hunts as a pack. They are menace that keep the party moving and will take advantage of any moment to strike from the water.

He welcomes everyone to the Coming of the Roc Festival and informs them that this is the year he will get off this pile of rotten garbage. He shows everyone a hook and rope harness and is answered by cheers. He tells people to bring the offering of the prisoners so that the Leviathan will stay sated. 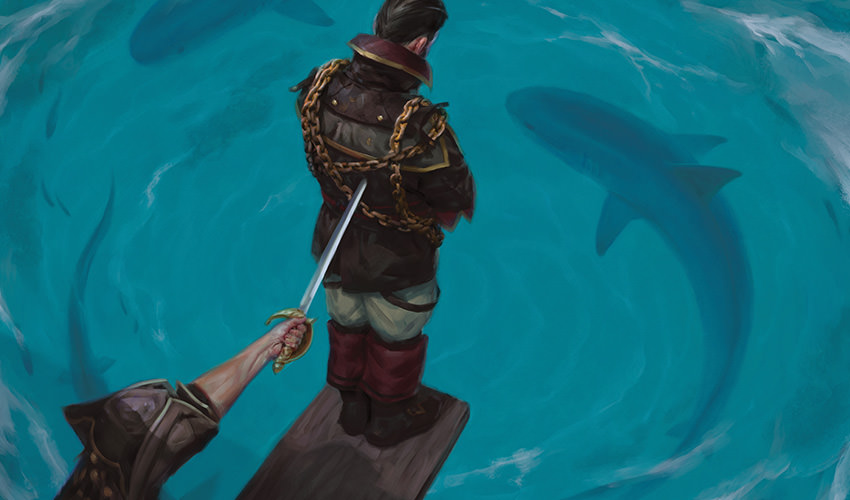 Players watch as the first group of forlorn looking prisoners is being marched to the plank.

As the first prisoner is pushed off the plank, a huge tentacle rises up from the water, slices him in half mid-air, and drags him into the ocean. More prisoners begin to drop off the plank into the increasingly red waters below. The players are next.

If the players manage to escape, Captain Bluto will shout “What are you doing!? You will bring the creature down upon us all!!”

When the ritual is interrupted, the Leviathan becomes enraged and begins lashing out at the island around it. All prisoners rush towards Poseidon's Wrath, which is now their only chance to survive and escape from the progressively decimated island.

The players will notice a rope dropped down from the crow’s nest that hangs crookedly above the pool - Skrank offering them a way out of the whirlpool of blood and angry tentacles.

From Crow’s Nest players will see everyone rushing towards Poseidon’s Wrath towering in the distance.

“Atop the Poseidon’s Wrath is the Roc’s perch! We must hurry if we are to catch it before the others do!”

Skrank will give the players a rope harness and a grappling hook explaining this is a one-way ticket off the island and motion with the hook that they can use to harness the bird and fly away attached to it by rope.

“There is a shortcut to the Poseidon’s Wrath, across the Flotsam Bridge but it will not be easy, especially for an old man with one leg!”

The players must figure out how to get to the Flotsam Bridge in a hurry. They can use ropes to make a zipline, fashion a large sheet of sails into a hang glider, cut down the crow’s nest causing it to topple, or find some other way down.

The “Flotsam Bridge” is the unstable part of the island, a field of floating garbage with a few large chunks of floating debris.

The players see prisoners running through the field, using hooks and ropes to jump from one floating pile of junk to the next. They will see a prisoner make a jump for it, only to get snatched mid-air by a shark leaping out of the water. This is going to be dangerous!

The sharks circling below wait for those who fall in the water to become their lunch, prisoners try to push each other and the party into water as they scramble towards the Poseidon’s Wrath.

The Roc’s nest is on the very top of the ship, nearly two hundred feet in the air. If the Skrank is still alive, his one leg is going to make this climb difficult. There are holes and rotting wood everywhere. The players may choose to enter the ship or climb the hull from the outside. There are prisoners who are hastily making the climb as well, desperate to be the first to get to the Roc and fly away with him.

The massive weight of the Roc landing on the ship makes it creak, groan, crack and break in places. As they rush to the top, the rotting timbers of the boat will break under their feet, and the tentacles emerging from below may grab them and pull them close to the edge.

The Roc And The Wet Place

Once the Players emerge at the top of the Poseidon’s Wrath, the immense sense of the Roc is stunning. This bird could fly away with a couple elephants in its talons. The only prisoners who make it to the top are Captain Bluto and his cronies. All the others are either behind or have fallen.

There is a dangerous fight at the top of the ship while in the shadow of the resting Roc, who plays no mind to the little fighters below him. Just then, at the height of the battle, the players and Bluto lose their footing, the boat shakes and to their horror, massive tentacles arise out of the debris and begin to swipe at the Roc, ripping Poseidon's Wrath to pieces! As it begins to collapse on itself the climbing prisoners scramble and fall.

The Roc takes flight, Bluto and any prisoners still alive throw their hooks onto the bird and are yanked off the collapsing boat. The Players either need to throw their hook and latch onto the Roc or hang onto one of the prisoners who are  hooked.

As the Roc flees the party sees the Leviathan destroy Poseidon's Wrath and break the island around it into small pieces.

The climax fight takes place on the ropes flying in the wind, attached to a flying Roc. Bluto and his prisoners will try to cut the ropes that the players are clinging to with their lives. Any fall from here down into the sea would be a certain death.

The Roc is much too large to notice anything hooked onto him, but if the fight turns too intense and bothersome, he might ruffle his feathers.

The Roc, players, and the surviving prisoners fly into the sunset and onto the next adventure. If Skrank is still alive he’s beaming with happiness, rattling off Roc facts, and planning to fly with him until he lands.

This adventure was made by the Adventure Writers’ Room.

We are a group of GMs who meet in the discord voice chat, and challenge ourselves to improvise a one-shot adventure (like this one) in 2 hours.

We’re looking for some friendly and creative people to join us!

See the other adventures we have created here.

Watch the brainstorming session during which we have created this adventure here.