Players are Pirates of the Floating Islands, and their home, Fera Ley (think Tortuga but in the air) is being attacked by the HMAS Valiant - a massive flying ship of the Royal Navy, sent to “bring order and civilization to Fera Ley and put the pirate problem to rest”.

The Dread Pirate Mont Blanc was just defeated in battle by HMAS Valiant, and now the players are Fera Ley’s last hope to keep her freedom.

The party meets up in the Buccaneer's Arms (the local Tavern). The Mayor of Fera Ley, a portly fellow named Richard Dullen runs into the tavern gasping and panting. “Mont Blanc has been defeated!” Everyone leaves the tavern and can see in the skies just off the island the end of a battle and Mont Blanc’s ship, the Stuart’s Satisfaction, going down in flames as boarding lines are being cut.

In the crowd, they meet Giotto Turtleton:

Their only chance at saving the island is to sneak on board of Valiant, rescue Mont Blanc, and capture the ship to make it a part of the pirate fleet.

Giotto gives players the shrinking potions, which enable them to shrink to roughly 3 inches tall, and, under the cover of night, fly their parrots to Valiant. Along the way they are attacked by a hungry osprey, and must defend themselves and their parrots.

The pirates land on the ship and revert to their normal size. They have to dodge or confront the marines aboard the ship, and encounter the Quartermaster, Victor Van Boom. Victor is crooked, and can be bribed (or threatened) to show the party the way to Mont Blanc and his crew in the jail cell.

Mont Blanc and the crew are in jail. The lock can be picked, or Victor can unlock the door. Their weapons are in the weaponry nearby, guarded by two paladins. Once the pirates are out, they will help the party to take over the ship. Meanwhile, Valiant is close enough to the island to attack. 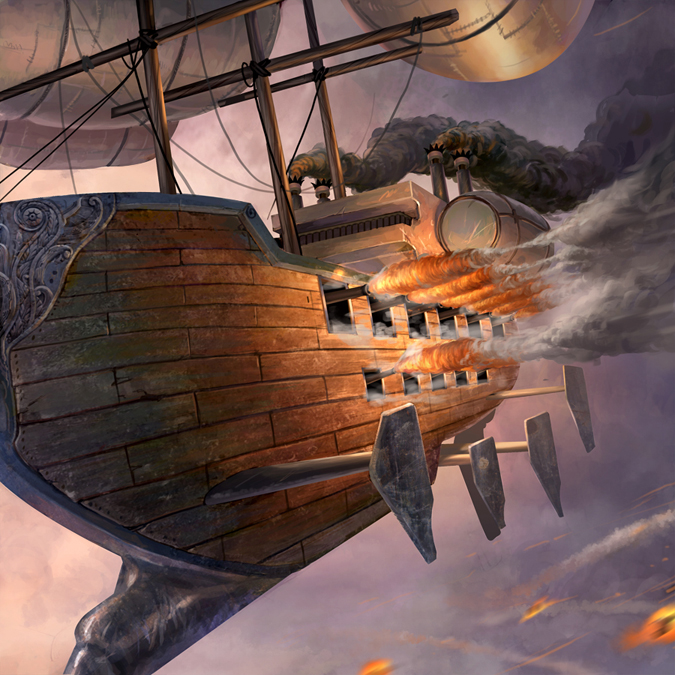 On their way to the captain’s cabin, the pirates must bypass the squadron of Navy soldiers. They can cause a distraction, or stealth their way through by crawling on the outside of the ship’s hull.

In the middle of the ship there’s a captain’s cabin.

Viva Morrow, the Angel of Death

Captain of the Valiant. Can be played as a paladin or equivalent. Has Iron Wings that deploy to fly her to safety in the event of going overboard.

Once the pirates get too close, Captain Morrow steers the ship in the direction of Fera Ley and then breaks the navigational system. As the players fight her and her crew, they must fix the ship before it crashes into the island, killing everyone in town and on board. The captain’s cabin contains the engineering blueprints which can be used to fix the ship, if players can get past Viva and her fierce attacks.

The Empire is repelled, Fera Ley’s freedom is restored. Now, with HMAS Valiant in their navy, they’re able to defend themselves against the Empire. The age of pirates continues. For now...

This adventure was made by the Adventure Writer's Room community. We are a group of GMs who meet in the discord voice chat, and challenge ourselves to improvise a one-shot adventure in 2 hours. Our goal is to brainstorm fun ideas and improvise stories together in a chill, lighthearted, no-pressure environment. It works, it really helps with the writing, and it is super fun.

We're looking for some friendly and creative people to join us!

Prompts App
A large collection of prompts that will help you to write or improvise adventures. Adventure ideas, antagonists, settings, challenges - everything you need!
Adventure Writing Academy
Learn to Create Awesome Adventures for Tabletop Roleplaying Games! Read the course that summarizes everything I have learned about creating adventures.
Adventure Writers' Room
Join our Discord community! We are a group of people who love creating adventures for tabletop roleplaying games, we help each other to brainstorm ideas and create stories for our players to enjoy.
Subscribe to our weekly newsletter, receive updates on new adventures and guides: