Our minds think by recognizing patterns, and using them to make predictions.

When you see a pattern (“A, B, C”), your brain automatically recognizes the pattern (“Alphabet”), and makes a prediction about what comes next.

Jokes have two parts, setup and punchline. Setup leads people to recognize a pattern, which their brains automatically use to make predictions and assumptions. Punch line forces their brain to switch to a different pattern, shattering their assumptions, making it clear that predictions they've made are invalid. 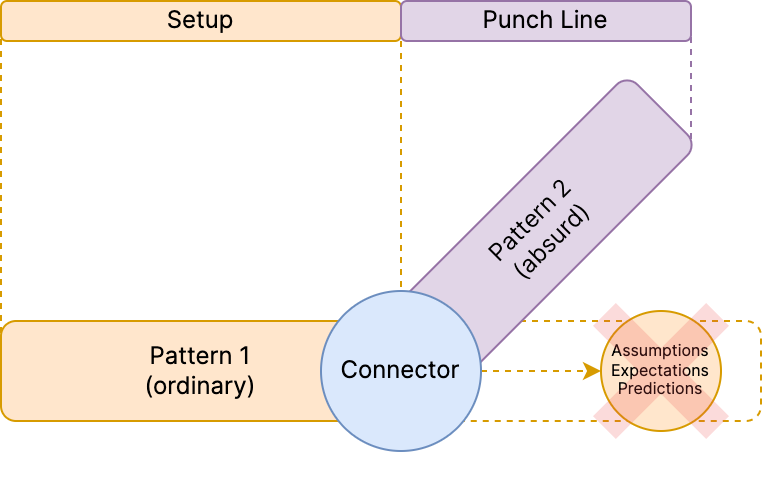 The two patterns must be connected by one thing they have in common - “Connector”.  Connector is one thing with two interpretations that belong to two wildly unrelated patterns. 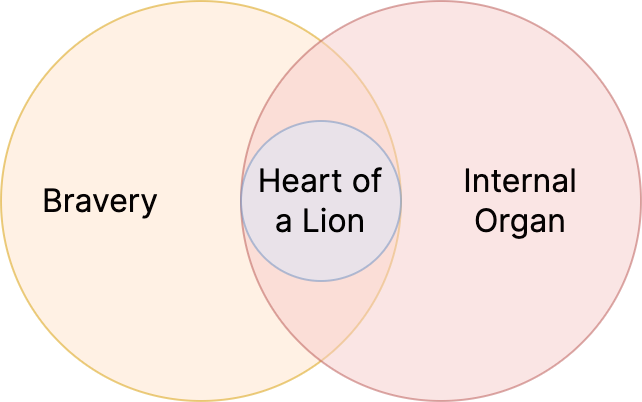 The connector, or the patterns, don’t have to be made out of words, they can be abstract concepts, or even visual appearance: 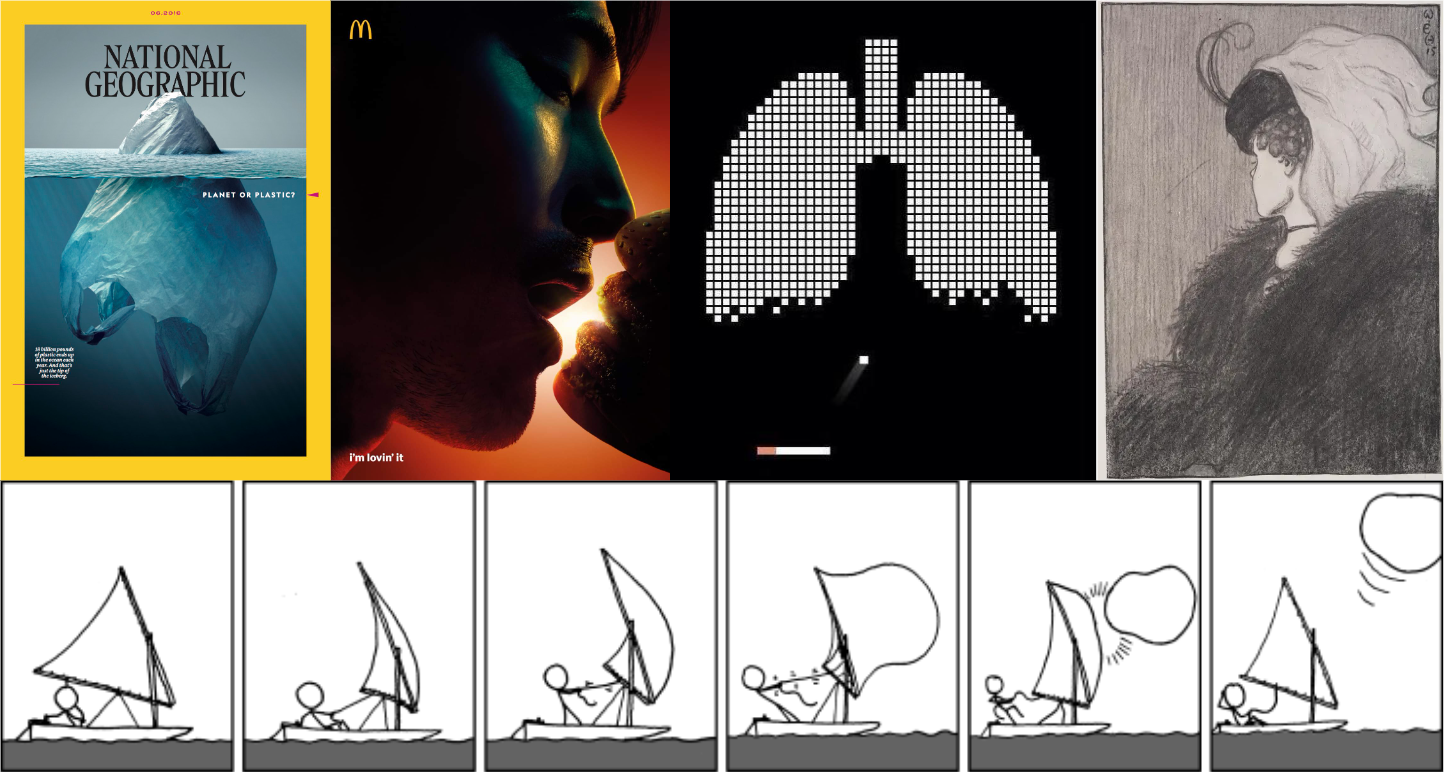 The idea here is the same, one thing with two interpretations belonging to two different patterns:

At the core of any joke is an "absurd association", an unexpected connection between two ideas, two patterns that don’t belong together, but have one thing in common - the connector, the one thing with two interpretations.

To write a joke, we need to find two patterns that are connected by one thing. Then we can write a setup - a statement that leads people to recognize the first pattern, and a punch line - a statement that makes them switch to the second pattern. 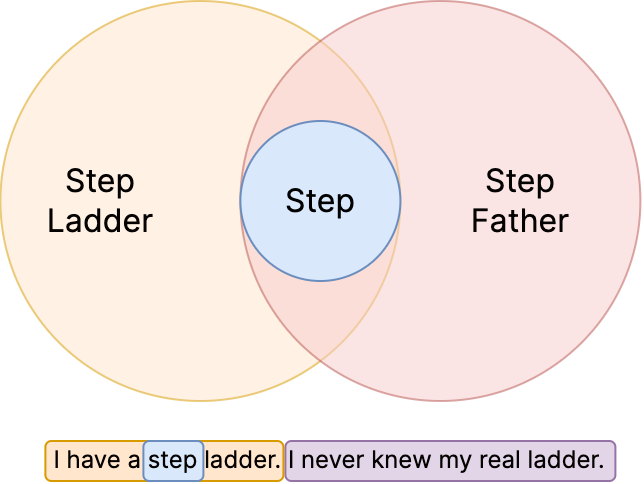 The less two patterns belong together (the “farther” they are from each other, the more absurd their juxtaposition is), the funnier the joke will be. The better the two patterns are connected (the more Connector makes sense in the context of each of the patterns), the “smarter” the joke will be, the more sense it will make.

So the trick to writing jokes is finding absurd associations, interesting connections between patterns that aren’t normally connected. “Cat” - “Paws” - “Dog” is a valid association, but it’s not funny or interesting, it’s too obvious. “Cat” - “Nine Lives” - “Video Games” is much better, because we don’t normally associate cats with video games.

So we need to be able to find absurd associations. To do this, we need to understand “pattern recognizers”. When your brain looks at the world, it recognizes small parts of it (little patterns, like letters, or shapes), and then uses these parts to recognize larger patterns (images, words, sentences, abstract ideas). 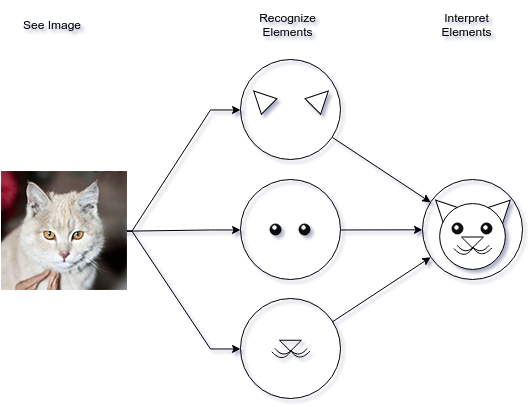 All patterns are made out of smaller patterns (elements), and are a part of bigger patterns (categories). Both elements and categories work the same way, they recognize patterns, so we call them “pattern recognizers”. 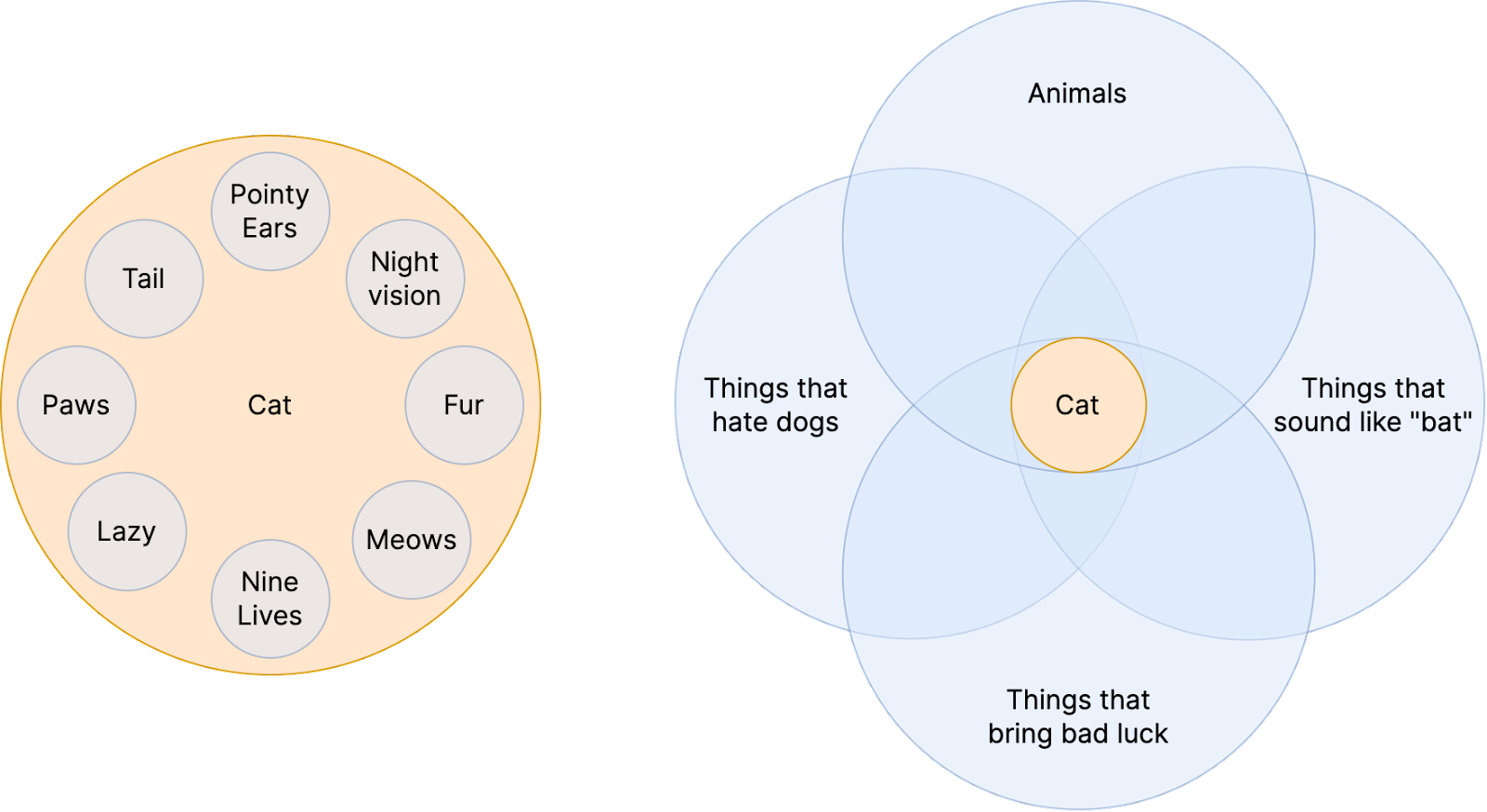 To make associations between patterns, we need to find a recognizer they have in common (aka the connector).

Take Element out of Context

Make a list of elements that belong to Pattern 1.

Take one element out of context (forget about the original pattern, look at the element on its own).

Find a different pattern it belongs to.

Our topic is “Cat”. We list elements, and take one out of context “Nine Lives”. Then we’re looking for other patterns the “Nine Lives” element belongs to, that are entirely unrelated to the original “Cat” topic, and we find “Video Games”.

When making a list of elements, you want to go for less obvious ones. 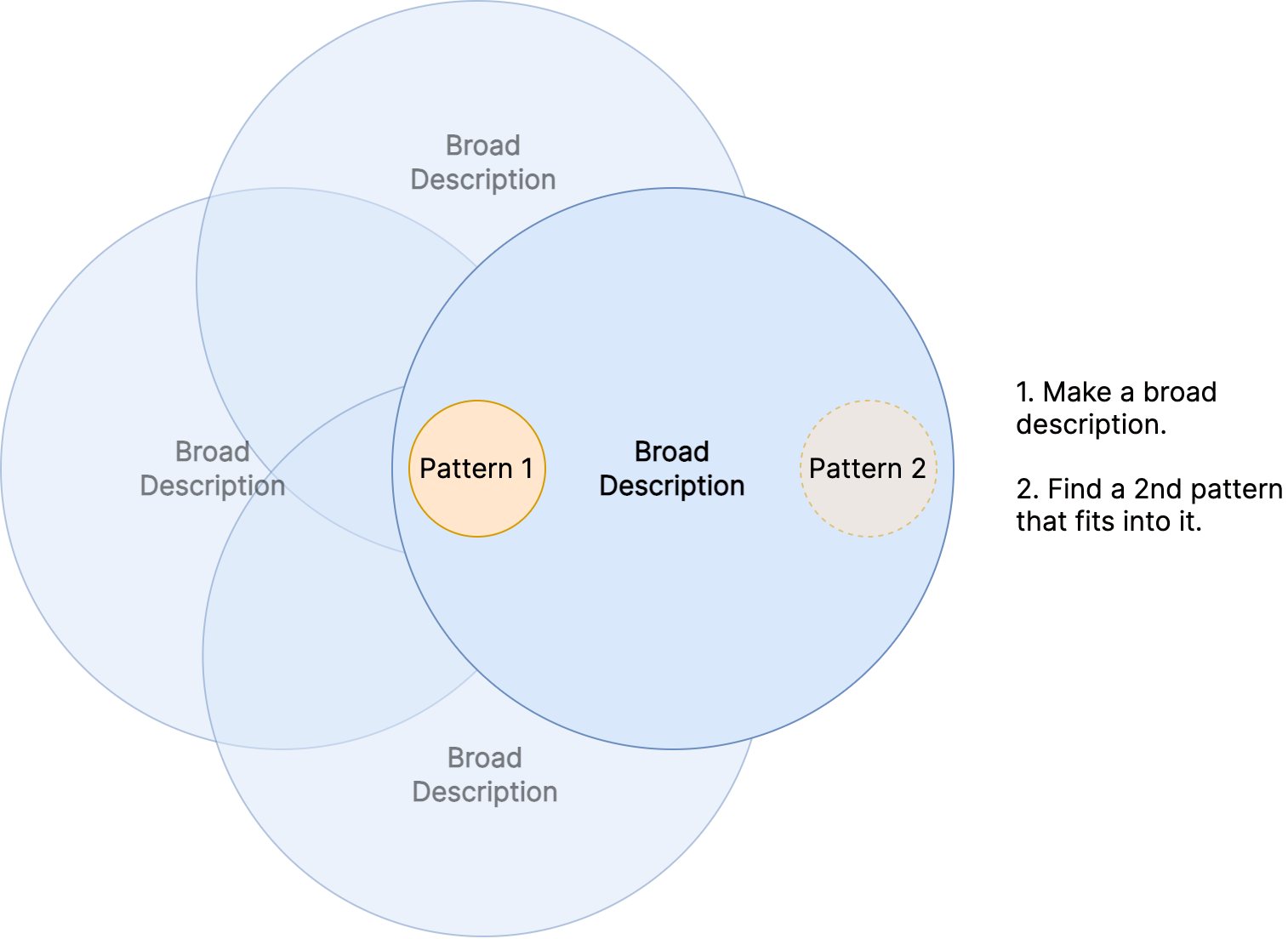 Take a pattern and make a list of Broad Descriptions - categories it belongs to, ways to describe the topic that are intentionally abstract, vague, ambiguous, unusual, unexpected, slightly incorrect, silly, or metaphorical. Deliberately describe the topic in a way that can fit many distant, unrelated patterns. Intentionally make up a phrase/metaphor that can lead you astray from the first pattern, can be connected to something absurd.

Then you can use these things to find much more unexpected and interesting associations: 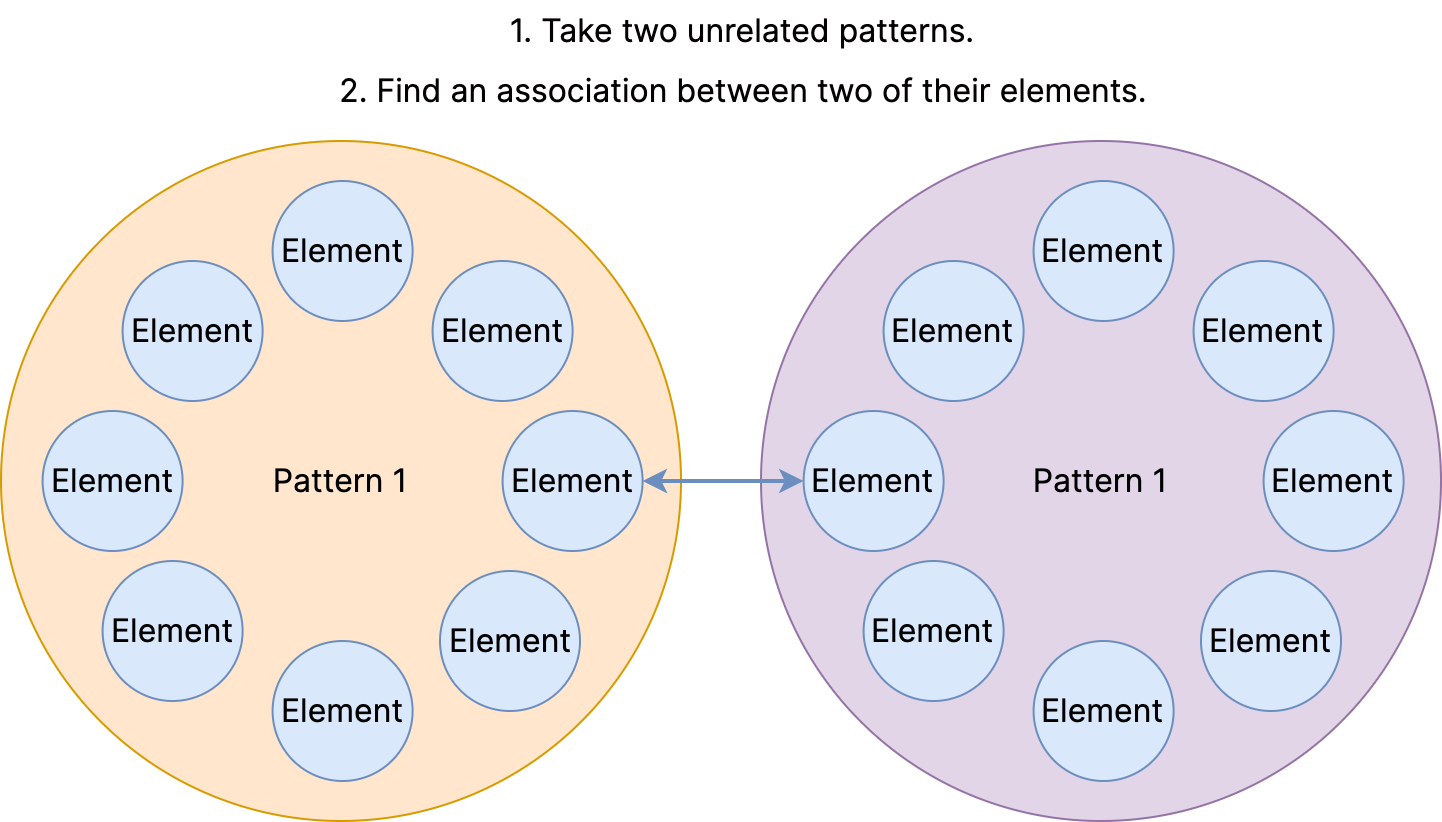 Take two entirely unrelated topics. Ideally ones that are far apart from each other, and aren’t usually connected.

Make a list of elements or broad descriptions for each of the topics.

Then find a chain of associations between these topics, ideally, a non-obvious, surprising, unexpected, interesting way to connect them. The shorter paths are better, try to come up with one thing both patterns have in common, one broad description that fits both topics. 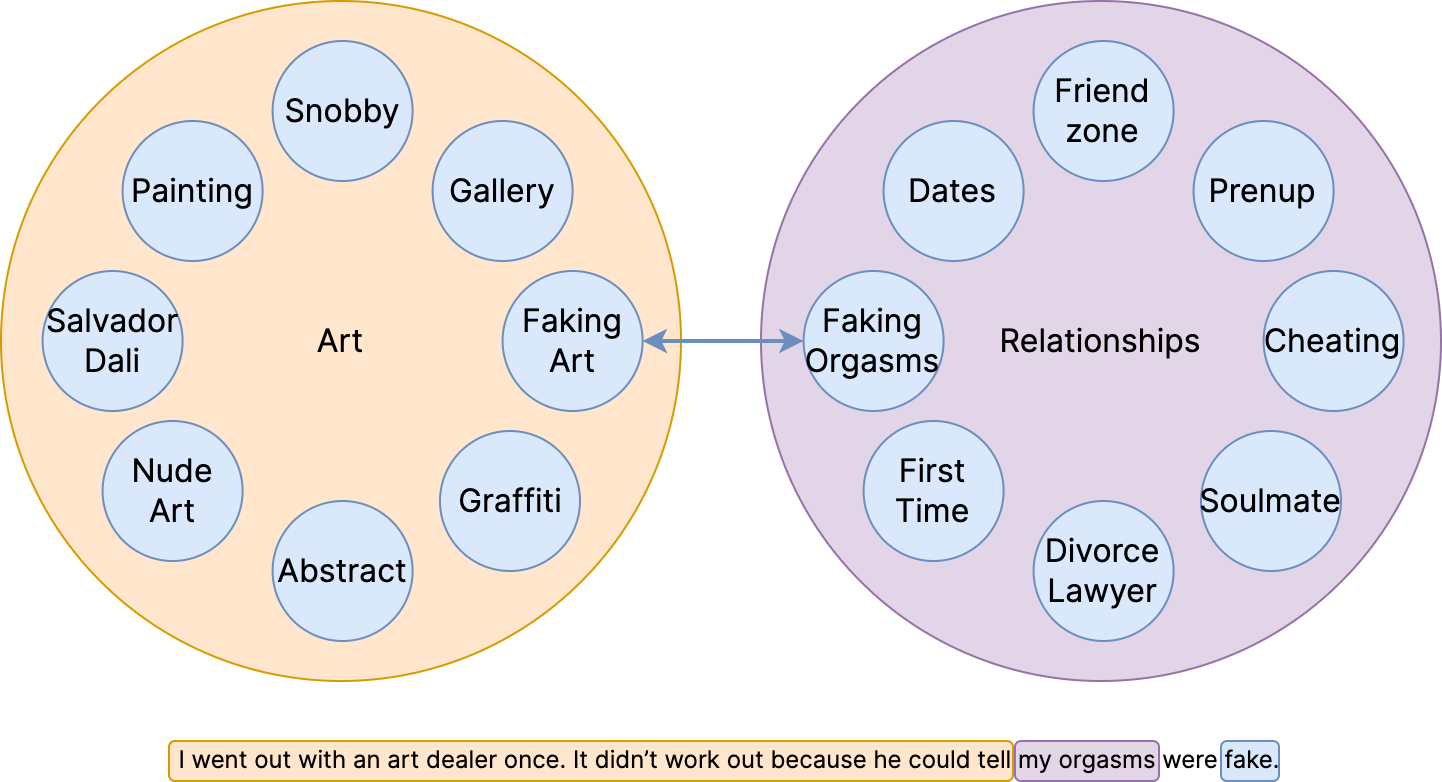 Once you have an absurd association, the two connected patterns, you can write a joke.

You can express the setup and punchline as a one-liner joke, or dialogue, where one person says the setup, and the other one responds with a punch.